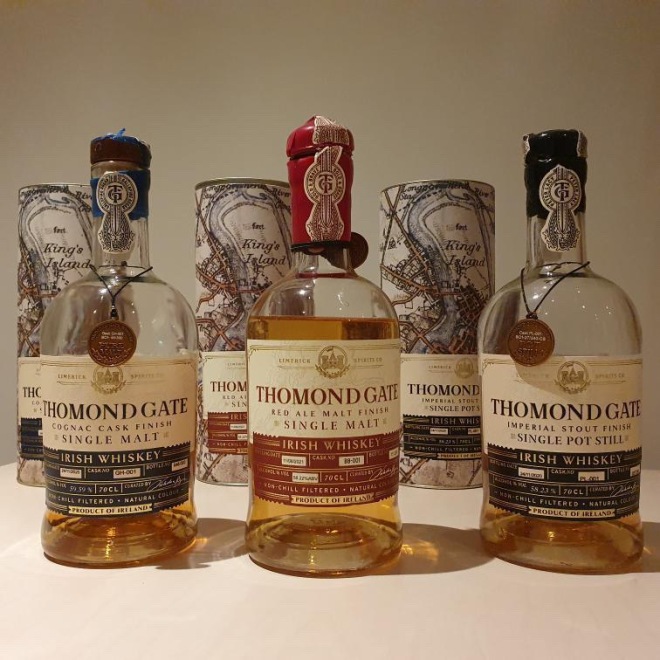 You should know the Water of Life team now; Mike does the Scotch, Dave does the Irish (and very occasional scotch), and this review does not fall out of line either. I am here to bring you another trio of Irish Whiskey: Thomond Gate Limerick Whiskey.

Irish whiskey is now one of the fastest-growing spirits in the world. Over the last five years, Irish whiskey has grown 13.4% in compound annual growth, with analysts predicting the growth to continue surging. 4.7 million cases were sold in 2018 in the United States alone. I do not doubt that the increase in brands is what has caused this surge; if you go back 10-12 years, there were mainly four brands that peddled Irish whiskey. Nearly a decade later, there are around 36 existing, planned or new distilleries across the island of Ireland. Given that Irish whiskey has to be aged for a minimum of three years, we are still to see the real impact of such a diverse and varied distillery populace.

Of course, pre-prohibition, world wars/civil wars and the industrial revolution Irish whiskey was never confined to 3 or 4 major distilleries on the island. Ireland was the leading manufacturer of whiskey; therefore, one of the key themes of Irish whiskey is now revival. I’ve talked about the revival of some of the bigger brands in the past, but one of the lesser-known brands, Thomond Gate, is back, invigorated and revitalised after a more than 100-year absence.

The long-lost distillery of Thomond Gate sat on the banks of the River Shannon between 1809 and 1919. Thomond gate takes its name from the fortified city gate, which was the most important portal in the city of Limerick; it linked the counties of both Clare and Limerick. What’s refreshing is the history, detailed work and research that has gone into bringing Thomond Gate to life again. The blueprint of a traditional pot still whiskey was rekindled and fortunately resurrected. And after 100 bottles of their inaugural release sold out in less than 12 hours, it was clear that its popularity was going to surge.

What’s vital for new distilleries is establishing an identity, and Thomond Gate have done this very well. The current releases are all part of a ‘Departed Spirits of Limerick’ series, inspired by the siege of the Williamites in Limerick, which I’ll take each in turn.

All samples, including the picture, were generously donated by Instagrammer Jonathon Ramirez, aka @mydramofwhiskey.

It was named after ‘General’ Peter Lacey, who fled Ireland with the other Jacobites. He ended up in Russia and became a very astute military tactician working under Russia’s Tsar Peter (the Great). The link to the whiskey comes from its finish in an imperial stout cask. The stout is a ‘traditional’ Russian imperial stout, typically brewed to a higher ABV.

This was a collaboration project with another Limerick business, Treaty City Brewery. A sourced whiskey, the ‘Peter Lacy’ Single Pot Still Irish whiskey, has been finished in a French Oak cask, which initially matured a Bordeaux red wine from the Saint-Emilion region. Treaty City Brewery used the cask to make its limited-edition Imperial Stout.

The wine spent three years maturing in the cask, which was then emptied and filled with the sourced Single Pot Still Irish Whiskey, which had previously been matured in a first-fill ex-Bourbon cask.

Nose: relatively light and fresh on the nose, with some zesty and fruity lemons and limes coming through nicely. The lemon is quite sharp, almost like lemon sherbet. Green apples, fresh-cut grass, Parma violets and orange peel complete a very nice nose.

Palate: lots of warmth coming through including hints of cinnamon, ginger and spicy pepper. Some sweetness also coming through from vanilla and bitter dark chocolate.

This whiskey is named after a Jacobite rebel who had a fiery side to himself, which resulted in blowing up a Williamite siege train. Following in the footsteps of General Lacey, he left Limerick and Ireland but went south to France and joined the French Army. The link to the whiskey comes from the finish in French Cognac.

The ‘Galloping Hogan’ is a Single Malt Irish Whiskey, finished in a French Cognac hogshead cask. The French Oak cask was naturally seasoned for two years in the southwest of France and flame toasted, then filled with double distilled Ugni Blanc Unieaux-de-vie from the Cognac Region.

The Cognac was matured for two years before being transported to Ireland, where it was filled with Single Malt Irish Whiskey. The single malt whiskey was matured in a first-fill ex-Bourbon cask.

Nose: Lots of enjoyable sweetness coming through initially with toffee, orchard fruits and green apples and fruit salad sweets. There are some notes sandalwood and vanilla which add variety, all gently balanced with cinnamon spice.

Palate: The spice hit is lesser than the Lacey, softer, still a big healthy blast of cinnamon, cloves and black pepper. Then some Christmas cake and aniseed add a different level to it, finished off with grapefruits and plums.

The whiskey is named after the Brazen Head, a red-headed woman who used stones from the walls to repel the Williamites She was eventually captured and beheaded to instil fear in the enemy. The whiskey represents self-belief and standing up for what you believe in.

The flame charred American Oak cask, which used to hold bourbon, was emptied and then filled with the same pot still whiskey used for the Peter Lacey release. After four years of maturation, the cask was emptied of pot still, transferred to Treaty City Brewery, Limerick to be filled with imperial Red Ale, although we have been given no indication of the duration of this step. Finally, the cask was then emptied once again and filled with the double distilled malt, previously held in a first-fill ex bourbon cask to produce the Brazen Head.

Nose: A beautiful fruity concoction of lemon zest, orange oil and blackcurrants. Then a combination of ginger, vanilla and some eucalyptus make it a very intriguing nose, begging me to take a sip.

I’ll take the vision statement direct from the website as I feel this will provide the assessment criteria.

“To distil our efforts to restore a local heritage craft, that delivers a unique pleasurable experience for our consumers, that enrich their senses and take them on a journey though time, by curating a spirit with depth and complexity beyond it’s years.”

Firstly, I might upset some Kinsale Irish whiskey followers here as I criticised them for making a whiskey to suit their narrative, which kind of sounds like what Thomond Gate did here, but with one main difference: Thomond Gate isn’t trying too hard, which maybe sounds like an understatement, but I’ll try to explain. Take the Cognac, that’s one element; Kinsale had various elements, rum and stout etc. Keep it simple, and it will work. To quote Thomond Gate owner, Nick Ryan: “It all comes down to the execution.”

The whiskey is very, very good. It is a sourced whiskey whilst the distillery is still in its infancy, but it shows what you can do with the proper cask management. These finishes are some of the best I’ve tried in a while and were undoubtedly pleasurable. The depth is outrageous; such range and variety of flavours comes out strongly in them and truly enriches my senses. Prices are very reasonable given the limited quantity, but be prepared to pay over double at auction now (the Red Ale finish recently went for 400 euros!).

Some slight negatives as I can’t just blow the trumpet all day long. Firstly, the website needs to be improved. It was very difficult to find information about their whiskies, which I feel should be on the site. It also requires a grammar check; petty, I know, but I can spot two errors from their mission statement alone. Also, I found there not to be a massive difference in the finishes, but subtle enough clearly to warrant a new release I suppose. I would be interested to try the port cask finish.

Overall, an impressive start and one that has made me sit up and take notice. I’m very intrigued about what they will do next and the results when their own spirit is fully matured.