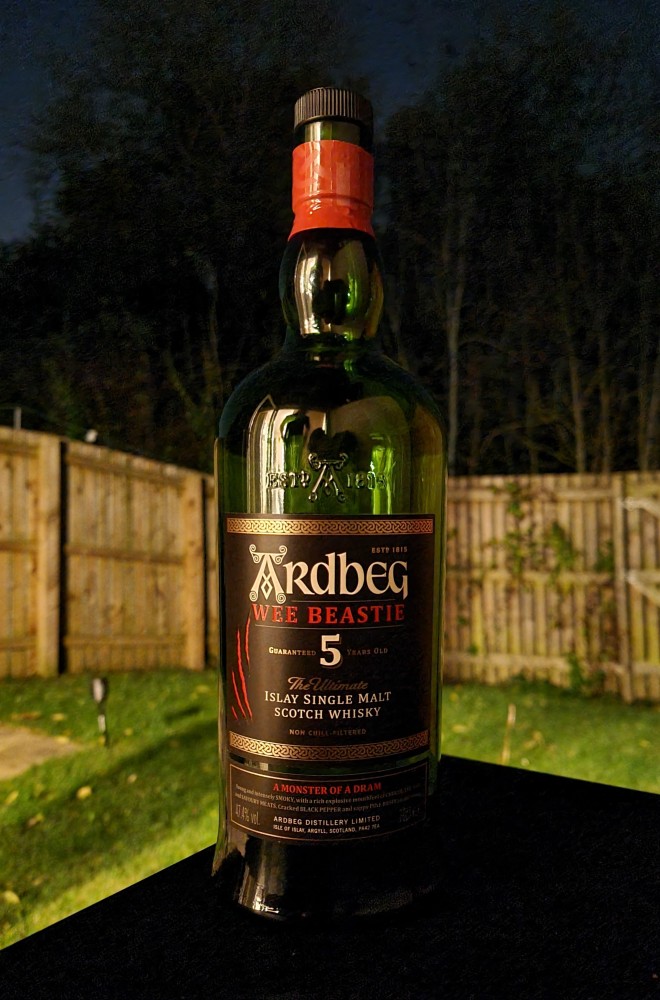 The nights have grown longer, the air has grown colder, and autumn is unmistakably upon us. With the season’s backdrop of spooks, fireworks, and bonfires, there was only one whisky I could crack open this weekend. I needed to have a monster of a dram.

Ardbeg is a distillery that should need no introduction for those following The Water Of Life. One of our first articles was Dave’s review of the Ardbeg 8 – For Discussion. This was an examination of the first of the two defining characteristics of Ardbeg: the much-lauded Committee Releases. This week, we delve into the second of these: just being a bit silly.

By and large, single malt whisky is serious business. It’s governed by strict laws and definitions, broken down for easy classification into regions, ages, and styles. It is treated with conservatism and reverence… most of the time. Of course, some distilleries release whiskies that deliberately challenge these attitudes. Very few of these, however, go quite as far as Ardbeg.

It’s not just the recent tour of Ardbeg’s Ice Scream trucks around the UK that makes me say this, nor the creation of a whisky based around their “definitely-real-and-totally-not-made-up flavour breathing dragon”. Ardbeg is the distillery that sent a whisky into space. Yes, there may have been a serious scientific purpose behind this, but the concept itself is inherently silly.

With this history, it therefore wasn’t too much of a shock when, in the Summer of 2020, Ardbeg released a 5-year-old, deliberately unrefined whisky I think my reaction to this news was: “Well, of course they did!” The bigger surprise was that this wasn’t a limited release but a permanent addition to their “ultimate range” (equivalent to the “core range” of less silly distilleries). And this is why I am now coming back to it: to find out if it stands scrutiny after the initial shock and hype, or if it was just a gimmick that’s been dragged out for too long.

Nose: Surprisingly sweet, with apple, demerara sugar, and a little vanilla. It is unmistakably Islay – smoke comes through strongly, with the tang of damp leaves burning on a bonfire, but also with a hint of hot tar. There’s sea salt and the iodine of seaweed, as well as a hint of oranges and lemons, and spice from black pepper.

Finish: Quite a substantial finish, featuring ash, salt, peat, pepper, and brown sugar. It coats the mouth and takes a while to fade.

Opinion: The Ardbeg Wee Beastie strikes a strange balance. On the one hand, it’s as unrefined as you would expect, with big hits of peat and smoke. However, on further examination, there’s a lot more to it. The complexity is the biggest surprise. Yes, it’s not the most balanced whisky around; yes, it’s youthful and a bit rough around the edges, but it wouldn’t live up to its name if it were anything else.

Instead of avoiding an age statement, Ardbeg has proudly proclaimed it to be only 5 years old. With current trends being to gloss over the age of anything less than 10 years, this has clearly been done for a purpose. This marks the whisky as young, intense, and unrefined: these are not usual selling points.

The most likely target of this challenge is Bruichladdich. It’s impossible to discuss young, intense whisky without mentioning the Octomore releases and their frankly preposterous level of peating. Although not all Octomore releases have an age statement, those which do tend to be 5 years old. Much as Ardbeg defy whisky norms, Bruichladdich allege that Octomore releases “challenge preconceptions of what constitutes quality whisky”.

A glance at Octomore’s packaging also shows that, while it is intended to defy “received whisky wisdom”, it does so from a serious standpoint. It looks sleek and modern, and the level of information printed clearly has the connoisseur in mind. Not so the Ardbeg Wee Beastie, which lacks even a cardboard tube to contain its monster themed bottle, emblazoned with claw marks. Instead of attempting to portray the whisky as progressive and classy, the marketing material channelled Halloween B-movies. The two also sit at very different price points, with the Octomore 12.1 available from £125. I don’t think the Wee Beastie is a deliberate attempt to undermine the Octomore releases, as the two don’t quite fight for the same market segment, but you can’t help but wonder if Ardbeg are saying: “Anything you can do, we can do cheaper.”

The Ardbeg Wee Beastie is quite a hard whisky to rate: for any criticism about lack of refinement, the riposte is that it is meant to be like that. It’s big, bold, and brash. But this is all part of the Ardbeg brand: doing whatever it takes to remain unmistakable and untamed. And a bit silly. Adding a mad, intense 5-year-old to the Ardbeg core range is just a part of this. It is much more than just a marketing gimmick released to ensure brand relevance. Ultimately, I quite enjoyed it and will replace my bottle when it runs out.